Last month I worked on a test illustration for the Folio Society. Although my test wasn't successful and the job was given to a different illustrator afterwards, I would still like to show you what I did.

Without giving too much away I was asked to illustrate a scene in colour taken from a short fairytale which was provided by the Folio Society. The scene I picked was full of characters and very complicated. What can I say, I was probably trying to show off! Below you can see my detailed rough. 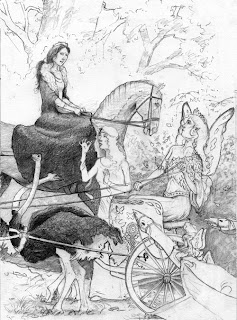 There were are at least another three different versions of this composition drawn before I reached the one above. I was struggling to fit all the relevant information in to what would be a small illustration so not surprisingly the art director suggested an alternative scene. Maybe in the future I'll paint this one for my own amusement, I actually think the colour will save it. 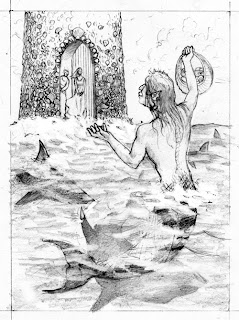 Above is the much simpler scene I decided to tackle instead. The main figure (Merman) is prominent and the direction of the narrative is obviously between him and the maiden in the tower. We both agreed to go ahead and paint this idea instead.

Stay tuned for the colour version(s)...