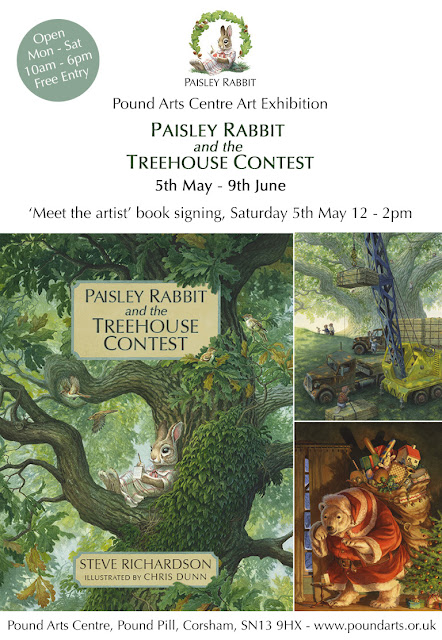 I'm really excited to announce an exhibition of all my original paintings and sketches for 'Paisley Rabbit and the Treehouse Contest'. It will be held at the Pound Arts Centre, Corsham, from Saturday 5th May - Saturday 9th June.

Plus I will be signing books from 12-2pm on the opening Saturday.

Not only will the originals be available to purchase. I am stocking the venue with cards, prints and of course books! I really hope some of you can make it.


I'll do my best to post decent photos of the show. I'm also mulling over making a video for the first time.
Posted by Chris Dunn at 16:23 No comments:
Labels: Art, Chris Dunn Illustration, Corsham, Exhibition, paisley arbbit and the treehouse contest, Pound Arts Centre, Wiltshire

She Guarded The Castle


Here's something I finished just before the Easter break. This is my first Grimm's fairytale illustration. The scene is taken from 'Jorinda and Joringel' which features a witch who can take the form of an owl and cat. Her abode is a castle in the woods where she captures maidens, turns them into small songbirds and locks them away in cages (can you spot the key?).

For reference, I was fortunate enough to have a collection of woodland photos I had taken in the rain this winter. The castle is based on Helen's Tower in Northern Ireland, apparently you can stay there! As for the owl, I found a collection of shots on google and took bits from each to fashion my own bird perched on a branch.


Depicting mist can be a tricky business, keeping an eye on distance from the viewer juxtaposed with visible levels of detail can sometimes lead to overworking areas and underworking others. This in turn can ruin the atmospheric perspective I'm hoping to achieve. In the end I washed out lots of detail in the castle and trees, and chose to only fully define the windows and middle-ground tree branches

As I look back on the painting now, I'm very happy with the final result. I tried to imbue the painting with a dark foreboding presence without being a cliché. I think this image would work well in some of the later (and darker) Harry Potter books and also have a similar atmosphere.
Posted by Chris Dunn at 10:30 1 comment:
Labels: Animals, Art, castle, Chris Dunn Illustration, faerie, Gouache, grimm's fairytale, harry potter, illustration, jorinda and joringel, mist, short earred owl, watercolour, witch
Newer Posts Older Posts Home
Subscribe to: Posts (Atom)