Shortlisted In Artist Of The Year 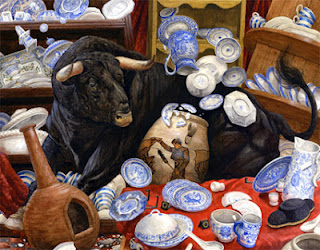 My painting 'Cracked Matador has been shortlisted in the 'Other' category of the Artist Of The Year 2012 run by Artists & illustrator Magazine in association with the Victoria & Albert Museum.

All of the 50 shortlisted entries are on the Artists & Illustrators website here, If you would like to vote for my painting please click here, I would be extremely grateful. 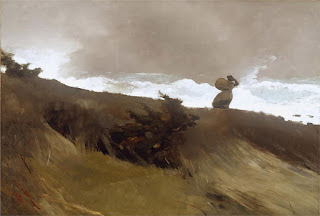 'The West Wind' by Winslow Homer

Irene Gallo at Tor.com has posted 'Picturing Autumn, An Equinox Celebration' which features close to 100 images that represent the new season by artists from the past and present.

It's quite a collection and well worth a look, however be warned you might just find time slipping through your fingers.
Posted by Chris Dunn at 12:39 1 comment:

The Bath Prize exhibition opened it's doors this Saturday and has proven to be very popular with the public. It certainly helps that this year's exhibition took place in a previously empty shop unit in 34 Stall Street, one of Bath's busiest high streets.

For those who don't know, the competition is in it's fourth year. Any artist can enter so long as they are willing to have the city of Bath as their subject. During the entry process each artist is given a certain location in the city that has to feature in their first piece of artwork, this means the views on show in the final exhibition may all be of Bath but the views are incredibly varied. 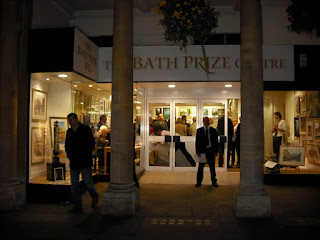 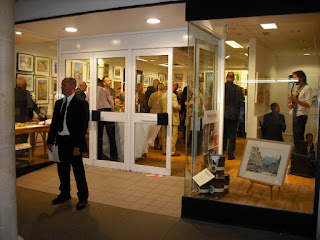 That's my painting of Lansdown Road in the window!

The overall prizewinner this year was Matthew Phinn for his oil painting of Walcot Street. Matthew is a watercolourist who has just recently decided to move into oil painting. I particularly like his piece for his obvious watercolour sensibilities appearing in how he was suggested the wet tarmac, somehow his has managed to make the oil paint literally drip and spread down the canvas just like the watercolour wet-in-wet technique.

Other winners were Ben Hughes for his painting of 'The Royal Crescent' in the Royal Crescent Prize and 'Laura Place' which won the Plein Air Prize alongside Valeri Pirlot for 'Sun Between The Clouds' and Peter Nance for 'Morning Street Cleaner'. John Mulvaney won the Pulteney Bridge Prize for his colourful painting of guess what, Alison Hehir won the Jane Austen Centre Prize for 'Ghosts Of Gay Street', I won the Minerva Prize with 'Little Owl Under North Parade Bridge', Andrew Taylor received the Guildhall Market Prize for 'Time Out With The Queen' and Jane Riley won the Farrow & Ball Prize for 'A Fly In The Pump Room'.

The overall standard this year is very good, especially when you consider quite a few of the entrants are amateur artists. My personal favourite is 'The Antiques Shop' by Ian Cryer ROI. From what I can gather Ian works from life which makes this particular painting even more impressive. The shelves are stacked high with all sorts of antiques, I can only imagine how difficult it must have been to simplify all that detail into a loosely painted but brilliantly solid image.

Unfortunately I can't publish photographs of the artwork which gives you even more reason to pop into the gallery and see the paintings for yourself. The exhibition shall be there until the 29th September after which some of the highlights will be on show in the Bath Gallery on Bridge Street.
Posted by Chris Dunn at 12:31 No comments:
Labels: Alison Hehir, Andrew Taylor, Art, Bath Prize 2012, Ben Hughes, Chris Dunn, Ian Cryer, Jane Riley, John Mulvaney, Matthew Phinn, painting, Peter Nance, Review, Stall Street Gallery, Valeri Pirlot

Very recently I completed a small illustration for a finance magazine. The deadline was so tight that I decided to paint the background and foreground separately so I could speed up the painting process and adjust the final image in Photoshop much easier. The final result I shall post when it is published.

However for now I want to see what I can do with the process if I have more time, partly because it will be an extra option available to me during commissions but also because it should be fun. Another technique I have been dabbling with but not extrapolated is creating a grey acrylic underpainting and then glazing with subtle watercolour to give a desaturated feel. 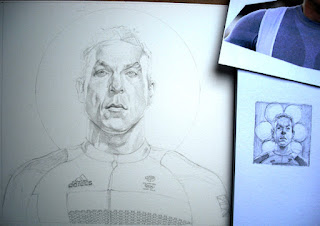 Above you can see the final pencil work and a thumbnail next to it suggesting a possible background. Hopefully you can recognise Sir Chris Hoy the astounding Olympic cyclist. I plan to paint his portrait as realistic as possible and block in a very simple grey background with a white circle in the middle. I shall then draw out the Olympic medals on a separate piece, colour them in Photoshop and then create various backgrounds to sit in behind the portrait.

It's important to have some fun with your work every now and then. I should try to follow that mantra more frequently but deadlines get in the way of sketching for fun.

HOWEVER... I took the day off yesterday and did a bit of plein air watercolour painting by a bridge in the Bowood estate at the back of my house. Perhaps painting is not the right word, more sketching with a brush in the hope that the more colour I add it will look better. Maybe I didn't succeed but it was still fun and very relaxing. 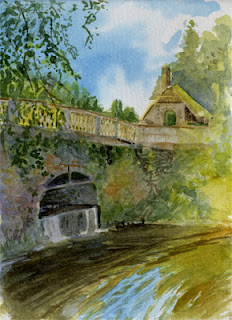 Alternatively if you want the end product to be good without having to think about it you can always copy something, I think they call it Fan Art. 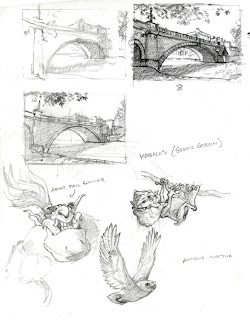 As part of my rough sketches stage for my recent painting of North Parade Bridge I had to come up with a creature design for my hidden Greek Goblins. I thought to myself I need to get my monster juices flowing so after dismissing the usual options (get bitten by a super spider, expose myself to extreme super power inducing radiation and declining a drink from Dr Jekyll) I decided to do a smaller copy of a Paul Bonner creation. Needless to say copying got me in the mood for producing an original design which I was rather pleased with.

I finally finished my painting of North Parade Bridge yesterday after blocking in the trees and adding a camouflaged Kobalos (Greek Goblin) of which I have shown in a detail below. 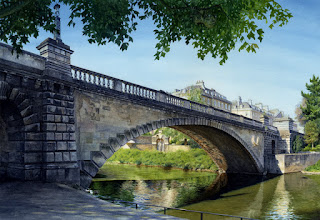 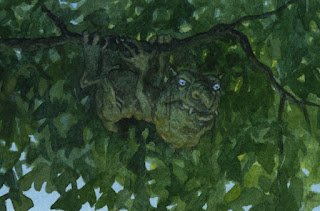 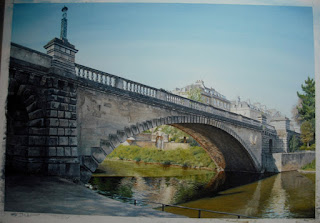 It's starting to come together now with my painting of North Parade Bridge, everything that I've posted so far is now close to being finished which has enabled me to make a start on the overhanging leaves. 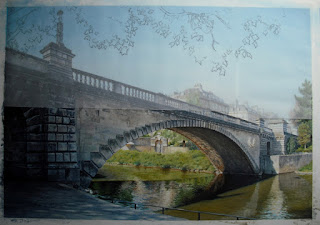 You can see I've laid some tracing paper over the sky so I can sketch the basic outline of where the leaves and the odd branch are going. I shall then transfer the outline and draw with a brush instead to avoid obvious pencil lines.

In other news, mixed media artist Carmen B Norris has posted photographs of the Swindon Open Studios event from last weekend - click here to view them. Don't forget the Open Studios shall be on this weekend too so if you're nearby please drop in.

I've been gradually scratching away with a paintbrush this week. Below you can see how the painting has been progressing. 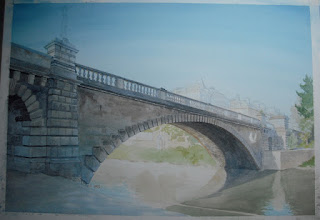 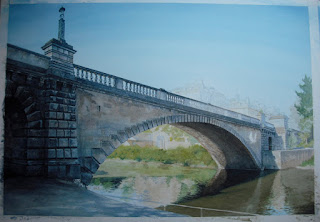 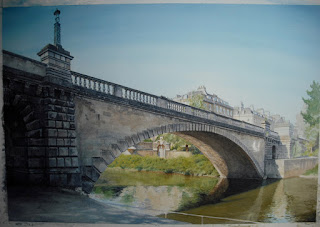 Don't forget you can come and see the painting in person and the artist attached to it this Sunday at the Swindon Open Studios in the Reference Library (rear of Central Library). 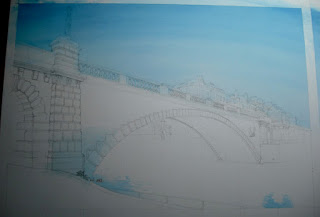 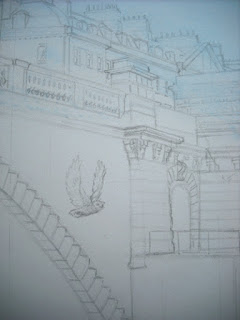 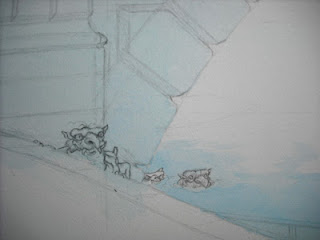