Apologies for my blogging absence I simply failed to put time aside for a post.

So far I have showed you how I worked on an acrylic under-painting to re-enforce the design and provide an extra layer of colour in the Secure Computing cover illustration. 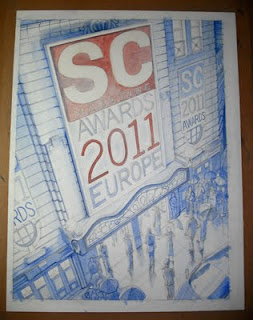 Following on from that I whipped out my usual watercolours and got painting safe in the knowledge the acrylic under-painting would hold the artwork together while I was splashing about with paints. It didn't take too long to work up the correct values, most of the street scene at the bottom is in opaque gouache. 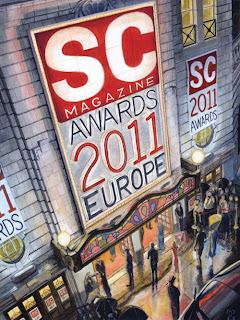 View Down The Bradford-On-Avon Shambles 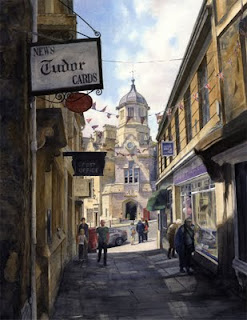 42 x 68cm
I have just finished this watercolour so I guess this post is hot off the virtual press. There is a tiny bit of gouache on the bunting but the rest is purely watercolour. I've tried to experiment with focus in this piece. The alleyway or 'shambles' is very loose, deep in contrast but quite scratchy hopefully leading the eye towards the church which is much sharper and more detailed even though it's further away. Too me this gives an odd sensation as if the church is moving toward you, similar to those famous dolly zooms Spielberg used in Jaws. Click here to see what I mean.
Posted by Chris Dunn at 12:34 2 comments:
Labels: Bradford-on-Avon Art watercolour painting artwork shambles

This commission is from a while back but I just haven't got round to posting about it (slapped wrist).
I was originally asked to work on a group portrait of all the judges for the SC Awards so I got down to that, then halfway through the editor asked me to work on the cover as well. After a struggle I completed the portraits, there weren't many decent photos available so needless to say I won't be posting that illustration. I have to exercise my quality control occasionally.
Next up was the cover. The editor wanted a night time scene of a glitzy awards ceremony being held at a posh London theatre. He suggested I could incorporate lots of bright lights and the impression of reflections on the wet pavements. I felt pretty confident because I could already see the image in my head and I knew exactly how I was going to tackle the brief. 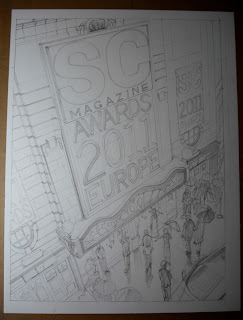 The first image is the final pencil drawing. I wanted to get the detail and perspective bang on so drew a grid, one for the building and another for ground level. I managed to find a high quality photo of a London playhouse and a few others of the same building at night. Both things enabled me to stop worrying about the detail later on in the painting process.

The next step was to work on the values in the image. I pulled out some ultramarine acrylic and worked up all the shadows knowing that the blue would slightly show through the watercolour when finished thus giving the painting a cool glow, perfect for a night scene. Another added bonus is the acrylic effectively fixes your drawing underneath so all the hours spent on the detail won't be lost when wet. I hope to experiment more with different acrylic colour schemes as a under-painting for watercolour soon.