Accepted For The Bath Society Of Artists Open Exhibition

I've just had a nice surprise in the post. The two artworks I entered into the Bath Society Of Artists Open Exhibition have been accepted. The exhibition is at the Victoria Art Gallery, Bath, 31st March - 19th May. Looking at previous shows and the amount of work that was being handed in last Saturday I predict this year's will be a high quality, varied in media and packed to the brim.

Foolishly I confused the handing in date which meant I was not able to complete 'Lansdown Road' in time for the exhibition. I had to resort to the faithful 'Cracked Matador' and 'It's Raining It's Pouring' for my entries, click here to view them. It certainly helped they were already framed and fixed with mirror plates from the RWS show.

'Lansdown Road' has now been placed on the back burner so I can crack on with a children's book, but I shall return to the painting periodically and post progress shots as it advances.
Posted by Chris Dunn at 12:28 2 comments:
Labels: Bath Society Of Artists Open Exhibition 2012 Christopher Chris Dunn

A couple of shots showing how the painting looked at the end of a days work and how it looks right now. Can't chat, lots to do... 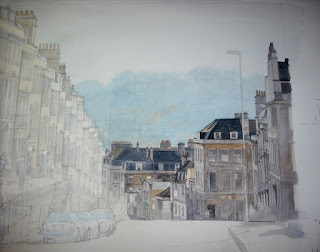 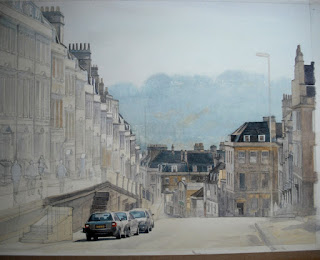 Royal Institute Of Painters In Watercolours 2012

The RI is currently holding it's 200th exhibition at the Mall Galleries. You have until the 25th March to see it and if like me you're a big fan of water based mediums and you live in the UK then there is no excuse.

The exhibition contains 366 works which are, as expected, all of a very high standard. I visited the show yesterday en route to picking my artwork up from the RWS. The Mall Galleries were heaving, there was a considerable crowd around Chris Forsey and Anne McCormack as they demonstrated they're process and a lesser gathering at the makeshift cafe in the corner. In fact I had a bit of a moment when I had to cut into the 'tea & cake' queue in order to see the paintings hung behind it. I was given a few disgruntled looks but they quickly turned to relief as I moved on to the next painting instead of jumping in and stealing the last macaroon.

Some of the highlights for me were:

Victoria Station by Eva Tomkins (above). It might be small but the composition is epic. Eva manages to show a full panorama of the station, keep perspective in check, control her palette and have it nicely populated all at the same time. I wonder if she is planning a large scale version? 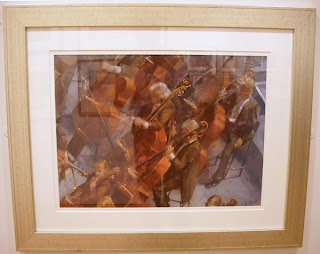 Proms Schubert by Geoffrey Wynne (above). Superb composition and choice of angle which for me gave the painting a crowded and energetic feel. The colour and light handling was subdued but effective, however I felt Geoffrey had missed a trick in not showing facial features. He could have created a narrative through the various characters in the orchestra but that's the illustrator in me picking fault. 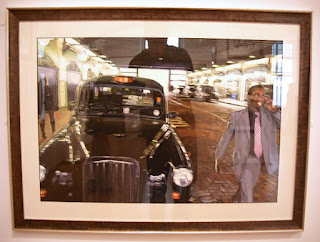 Embankment Appointment by Mark Elsmore. Arguably my favourite, Mark has created a watercolour so different and well executed that I just had to go back for a second look. Before you ask, no I haven't got the shakes, the painting is deliberately blurred like a rushed photo. A very nice touch that gives energy to what could otherwise be a depressing composition. The man on his phone looks suitably engrossed in his conversation, perhaps he's late for an appointment, did he get a taxi and what convinced him a pink tie on a black shirt looks good? These are all part of the urban narrative Mark has reveled in and I love it!

As you can see the show is well worth a visit, my only slight grumble would be some of the dated stylistic approaches I found. Not many but enough to make me think of children's book covers from the 1970s. In a way this is to be expected, most artists have to be in the watercolour game for a time before they are accepted as members unless of course you are the son of the patron.
Posted by Chris Dunn at 17:14 No comments:
Labels: RI 200 Royal Institute Of Painters In Watercolour 2012 review Christopher Dunn Art

The deadline may be the 26th of March* and even though I'm juggling lots of projects at the moment I'm going to try my hardest to be outside the Bath Gallery holding a finished watercolour to enter. Below you can see the stage I'm at now. I gridded up a photo montage composition and painstakingly drew every single Georgian window I could see, at the same time trying to be true to perspective.

The view is looking down Lansdown Road which leads right into the heart of Bath. As you can see it's rather steep which really added to the enjoyment of chasing around with my camera trying to find a nice composition. 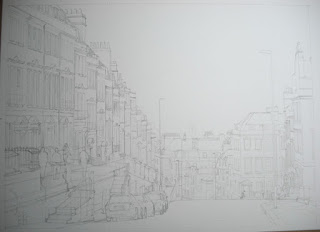 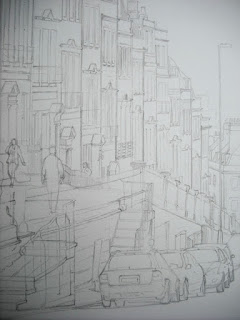 *Addendum on 23/03/12 - I have just spotted the handing-in deadline is the 24th of March. Unfortunately this means I will not complete the Lansdown Road painting in time so it looks like I'll have to delve into my back catalogue.
Posted by Chris Dunn at 21:00 No comments:
Labels: Bath Art Society Open Exhibition 2012 Chris Dunn Art Pencil Lansdown Road Progress 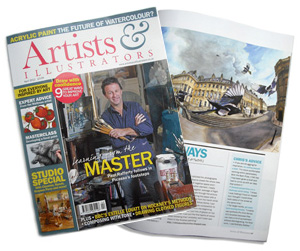 In case you happen to pick up April's edition of Artists & Illustrators, look for their regular feature 'Winning Ways' in which they interview an award winning artist and their process. My Bath Art Prize win is highlighted in the latest feature thanks to the lovely Martha Alexander.
Posted by Chris Dunn at 15:40 No comments:
Labels: Artists and Illustrators Magazine Bath Art Prize 2011 Winning Ways April 2012 Martha Alexander
Newer Posts Older Posts Home
Subscribe to: Posts (Atom)