To follow on from my previous post about my test illustration for the Folio Society, below you can see my first attempt at the finished colour version, executed in watercolour. 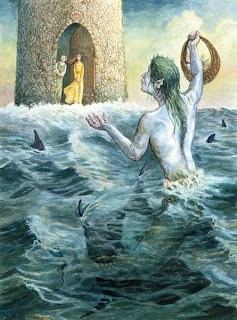 All the criteria was met with the above illustration but I felt it wasn't good enough. The sea wasn't particularly well painted and the Merman was flat along with the submerged sharks. I was trying to pull back on detail so I put this failure down to my lack of skill working loosely with watercolour.

After some time of pondering my finished illustration I decided to do another version that was more in my comfort zone. I deliberately concentrated on the shape and form of the Merman and sharks which led to my decision to simplify the sky. I also stylised the sea so that underwater details were easy to see and hopefully didn't complicate the image. 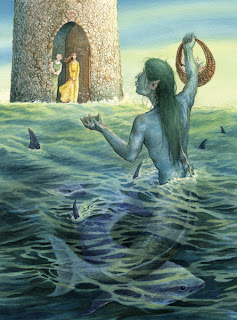 I was much happier with my second version and so was the Folio Society but in the end I still didn't get the seal of approval. Being an illustrator you get used to rejection, it may be depressing on the day you hear but by the next day you have to move on and learn from your mistakes and above all improve.
Posted by Chris Dunn at 20:23
Labels: Art, Chris Dunn Illustration, Fairytale, Folio Society, Merman, Shark, watercolour

Not sure which is my favourite, the first is more dramatic and I felt that I could hear the waves splashing. Love the light in the second one. I didn't realise that it was a merman and felt that she could be prettier. Maybe the hair could be shorter although the text would probably clear up that problem. Fabulous work as usual.

It's a tough one Celia.

The text was quite specific that he was am ugly long haired merman with blue skin. In the story the maiden in the tower thinks he is handsome because she's never seen a real man before!