Short synopsis of 'Give Me My Bones Back' by Chris Dunn:
Walt is a small boy who lives in Shacottiby-on-Sea with his mum, his father died in a fishing accident involving a Blue Whale. The story begins with the appearance of a Blue Whale in Shawcottiby harbour who demands to have two bones returned to him. His bones are part of a large monument erected on a cliff top overlooking the town and are very dear to the towns people so they refuse to return them. A stand-off between the whale and the town ensues which last weeks. Walt is the only person who sympathises with the whale and decides to help him. He dodges the local bullies to loosen the bones from their brackets but has to stop to avoid being caught. He fails in his attempt to free the bones but that night there is a storm and lightning strikes the bones popping them out of their brackets and down into the sea. Walt doesn't find out until the morning that the bones and the whale have left Shawcottiby.
The above is a synopsis of a Children's book I have written. I have also finished two double page spreads which are the first four pages of the story. Why have I done this you ask? Because the blog Illustration Rally are holding a competition which ends this Friday that offers the chance to meet with some Children's book heavyweights. All you have to do is enter two DPSs of artwork and a synopsis of the story if it is an original manuscript.

I'm not going to release any of the finished artwork but for your viewing pleasure here are some quick sketches which I used to transfer onto Bristol board when working on the final pieces. 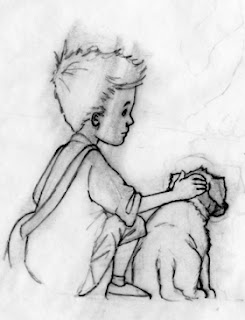 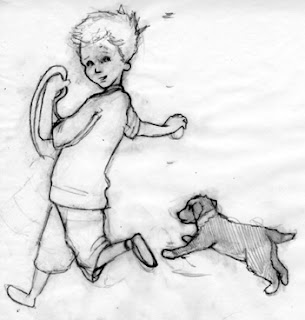 Shawcottiby is an anagram of Whitby Coast, somewhere I have regularly visited since I was young enough to be pushed about in a pram. Whitby's fantastic cobbled alleys and steep cliffs are a perfect setting for any kind of story, no wonder Bram Stoker first thought of Dracula there.
Posted by Chris Dunn at 16:59
Labels: Children's Book Rally