Scrap that reverse it... or sometimes it's best to realise your mistakes 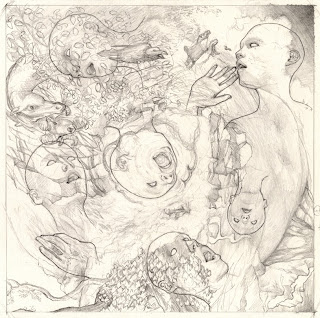 In previous posts I've shown some WIPs for an oil painting I have been working on. Unfortunately my oil painting skills aren't up to scratch and I've made a complete hash of it, I might just have to install a 'gallery flambeau' (check James Gurney's imaginative realism). So after putting that aside with a bin liner wrapped around it I've attempted a re-run on the concept and come up with this sketch. Fortunately this has been approved by my friends who will be receiving the final artwork so I can now get on with the final drawing.

To try to explain the composition it is taken from the 'Ainulindale' chapter in Tolkien's 'Silmarillion' where the world is created through song. I have tried to focus more on the environments this time but also kept with the singing characters. Also the circular composition is designed to be hung any which way and evoke a pulse of sound spreading from the center.
Posted by Chris Dunn at 17:21
Labels: Tolkien Simarillion creation singing sketch oil painting animals environments