For my previous posts click here, Part 1 and Part 2

Below are a series of progress photographs taken as I worked my way through the painting.
You can see here I am starting to get past the local colour stage and really moving into finding form using colour. For example look at the fox playing skittles. He is lit from the top by the warm glow of the lanterns (lots of cadmium yellow, yellow ochre and burnt sienna), however the majority of his head is facing away from the light so he is picking up the cool colours of the wood in shadow so (more prussian blues and greens).
By the above stage, I had just about painted the furry aspects of each critter to a suitable standard. Believe it or not, I had a folder of animal reference on my laptop that I methodically worked through from A to B (or badger to wild boar). I didn't move on to the next creature on the list until I had completed the one before it. I found it helped to break down the painting into manageable chunks by creating these small milestones to tackle each day. 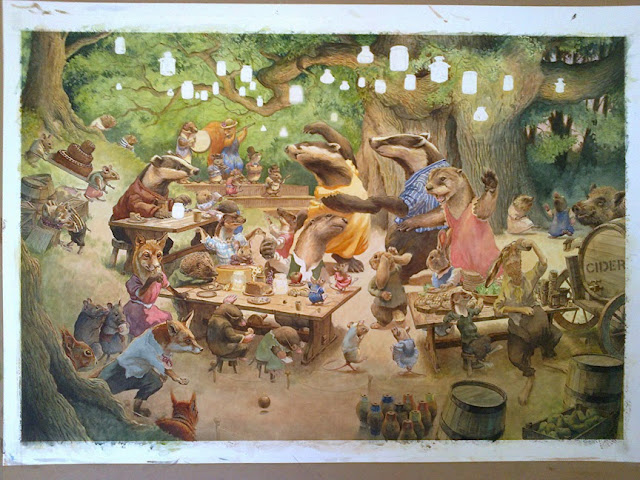 It's hard to tell from the above photo, but by this stage I was concerned with the lack of depth in the image. I decided to darken the bottom edges with cool colours to hopefully lead the eye further into the middle of the scene. The bottom edge now acted like the sides of a stage design by framing the scene and providing more perspective. Note how in the final image below I darkened the sky in the far right background, again to push that further away from the tree in front.

I also completed the lanterns by deciding to keep it simple by using just yellow ochre where I could. I felt they would glow more if I depicted less detail, as if they are so bright they would be over-exposed in a photograph.
Job Dunn (pardon the pun)! I was pleased with the final outcome as it came very close to realising the fuzzy image I had rolling around in my head at the rough drawing stage. However I wasn't pleased when I had removed the painting from it's board, scanned and stitched it together on Photoshop, only to find I had forgotten to paint the skittle ball being held by the rat! As you can see I fixed that and then double-checked the whiskers on every animal, which is normally the thing I forget to do at the very end.

I hope you enjoyed this series of posts. If you have any questions, please feel free to ask, either on the blog or Facebook.

Incredible! Thank you so much for sharing the process...though even though I've seen it step by step I'm not sure I could ever recreate something so beautiful!

Oh, it looks gorgeous!! Thank you again for sharing your process. - Dow

Thank you Clare and Dow!

I have absolutely loved seeing and reading about this whole process from beginning to end. I've been looking forward to seeing this last installment especially, and I think the depth you have captured along with the immense detail is just amazing. I could look at it all day! When you have finished a painting like this, do you have any idea how long it has all taken you to do? People always ask me that question when I have finished a large piece, and I find it really difficult to work out the time especially if there's been a lot of research along the way.

I am completely enchanted, I loved this from the first sketch you shared on Facebook. To be guided through your process has been a real privilege - thank you.

Wendy - Thanks for your nice comment too! I don't have a particularly clear idea of how long it took to complete this painting. However I would estimate 15 days from thumbnailing to final painting. I need to start keeping track of my hours spent each day so I'm able to price work and plan ahead effectively. Thanks for the reminder :)

Thank you very much for your generosity in letting me in to the back room. I could look at the 3 above until the moon has gone home and come back again. Love your work.