Selected For RWS And Bath Society Of Artists Open 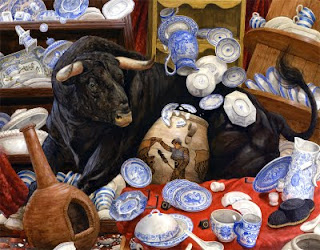 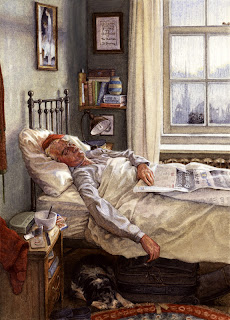 'It's Raining, It's Pouring'
Who'd 'av thunk it!? (yes that's thunk with a U). Both 'Cracked Matador' and 'It's Raining, It's Pouring' have been selected for the Royal Watercolour Society Contemporary Competition. The exhibition of all finalists will be held at the Bankside Gallery from 24th February - 14th March. You can get a sneaky preview of all the selected artists by visiting the RWS website and downloading their PDF list.

I'm especially pleased that 'It's Raining, It's Pouring' was accepted as it didn't make the cut for the RWA last Autumn. 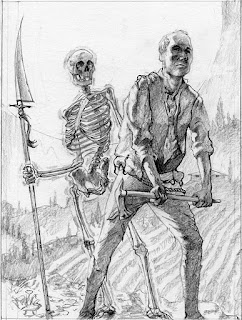 The sketch deadline for the ArtOrder Levi Challenge is today! Above is my entry. If you've been following my recent posts you've seen how the composition and anatomy of the figures has developed. If you haven't click here for part 1 and part 2.

Another recommendation I picked up from Andrew Loomis in 'Figure Drawing For All It's Worth', was to sketch with a soft pencil, using the point for line work and the flat of the lead for tone. I tried it out with the above sketch and I'll be sticking with 3B pencils for now on. Using a softer pencil gives me a broader range in tone and speeds up drawing no end!
Posted by Chris Dunn at 14:56 No comments:
Labels: Art Order Levi Medieval grave digger axe scythe skeleton pencil sketch drawing art Chris Dunn Illustration 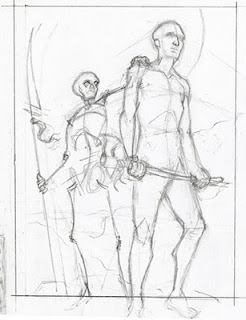 Above you can see some recent studies I sketched for the Levi Challenge over at ArtOrder. Both sketches I fleshed out using an incredibly useful figure drawing book and no photo reference. 'What is this book?' I hear you cry. It's 'Figure Drawing For All It's Worth' by Andrew Loomis. Originally published in the U.S 1946 and aimed at commercial artists who wanted to draw the figure quickly and convincingly with little or no reference. The book was a huge success and seems to have been devoured by just about every representational illustrator and comic artist working in the U.S today. I've noted lots of references online over the years by artists quoting the 'Loomis way' and calling for his instructional books to be re-printed. Titan Books have listened to these requests and acted on them. All I can say is I wish it was printed while I was still in University.

The above studies have helped me to establish the correct perspective and horizon line (just above the knee) I am going to use in the final pencil work for the Levi Challenge. I'm hoping to have the sketch finished before Friday.
Posted by Chris Dunn at 20:18 No comments:
Labels: Art Order Levi Medieval grave digger axe scythe skeleton pencil sketch drawing art Chris Dunn Illustration

I must apologise for my absence but I'm sure you won't begrudge it giving the time of year?

Let me kick off 2011 a quick highlight on the Atkinson Grimshaw 'Painter Of Moonlight' exhibition at the Guildhall Art Gallery in London.

Fortunately last week I spotted a preview of the exhibition on Charley Parker's excellent blog 'Lines And Colors' which I urge you to visit. Seen as I had to be in London yesterday to pick up some artwork I took advantage of my situation and hot footed it to the Guildhall.

The Victorian oil painter Grimshaw was believed to be self taught and I agree. His colour control was masterful and he seemed to have developed a muted colour formula for his ever popular nocturnes but his drawing skills were perhaps a tad wobbly. This would explain his reliance on photographs for reference which didn't go down well with his contemporaries. However painting at night in the 21st century is a challenge so it must have been a ridiculous task in the 19th century (no head torch back then).

I don't think Grimshaw tried to hide his use of photographs which I'm sure other Victorian artists did. In fact in one painting at the exhibition it appears he has painted directly on top of a sepia photograph then added the odd figure from imagination but only halfheartedly as if to say 'this bit is mine and this bit... is a photograph'.

The exhibition finishes on the 15th but will then be travelling to Harrogate for a long stint at the Mercer Art Gallery. It's well worth a visit with the added benefit of being close to Leeds so you can see how the streets in Grimshaw's paintings have changed.

As for the Guildhall gallery's permanent collection, it is a quality collection of Victorian painters. Alma Tadema, Rossetti, Tissot, Frederick Leighton and Millais all make stellar appearances and if that wasn't a good enough reason to visit there are the remains of a Roman Ampitheatre in the cellar.

I'll try to post some artwork but it could prove difficult because my current projects have to be kept under wraps.
Posted by Chris Dunn at 20:29 No comments:
Labels: John Atkinson Grimshaw Exhibition Guildhall Chris Dunn
Newer Posts Older Posts Home
Subscribe to: Posts (Atom)