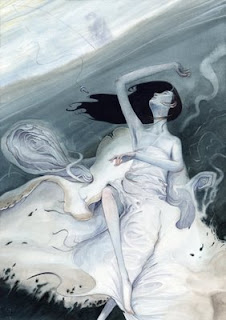 ‘Did you hear about Steve?’
‘No, why, what’s he doing?’
‘He’s stayed off work, on leave.’
‘Oh right, where’s he going?’
‘He’s on his honeymoon.’
‘What, he got married!?’
‘Yes, it’s a bit too soon’
‘hmmm, does sound hurried.’
‘He met her on the Aire’
‘Ha! Was he canoeing?’
‘No, twiddling his hair,
sat on the bank fishing.’
He felt a tug on the line
And started to reel in,
then in absolutely no time
he was planning a wedding!’
Apologies for lengthy silence after my last blog - I moved house, in fact I moved counties so I've been a bit preoccupied. Anyway you should note an improvement in the regularity of my updates because I now have access to the internet in the evenings.
Posted by Chris Dunn at 21:15
Labels: Bingley secrets, lady, river aire, underwater, watercolour