Many moons ago I studied in Swindon and up until a year ago I was still living there. I can't say the town itself ever particularly inspired me to paint but it does have some interesting features.

For example Swindon's heritage is based on the railways built by Isambard Kingdom Brunel (only he could get away with that name) so not surprisingly there is a large statue of the man in the town centre. The old Town Hall is a gorgeous redbrick Victorian beast and one of a few such buildings surviving in the town. Then there are the more modern constructions such as Swindon's solitary skyscraper the David Murray John Tower and futuristic leisure centre dome called The Oasis. Also another statue is the Blondini acrobats, I'm at a loss as to why it was made but it's certainly eye catching. Finally in this long list there is arguably Swindon's most famous landmark and something which 'drives' the fear of God into the petrified hearts of all learner drivers - THE MAGIC ROUNDABOUT. Imagine a massive roundabout that feeds 5 busy exits, none of which are governed by traffic lights. Then imagine this monster is actually made up of 5 interlocking mini roundabouts which often have two lanes encircling them. It's ordered chaos and yet I have never seen an accident on it.

Anyway why am I babbling on about Swindon? It's not a habit of mine but I thought you might need some background knowledge before you saw my latest private commission below. 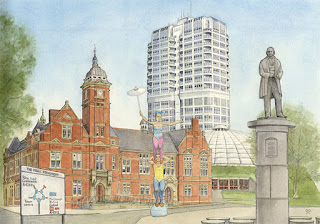 Swindon Montage 30 x 42cm
I was asked to keep this painting simple. Really it is more of a pencil line drawing with a light wash of watercolour at the end. Thankfully the end result ticked all the criteria and I had a happy customer!
Posted by Chris Dunn at 20:33
Labels: Chris Dunn Illustration Art Pencil Watercolour Swindon Mantage Town Hall Brunel Statue Magic Roundabout David Murray John Tower Blondini Oasis Centre Painting

Ok Chris... You refer to this is a simple line drawing... I find it to be extreamly detailed.. It is a beautiful piece of history, I believe.
Wishing you a creative and peaceful weekend.
Penny

Thanks Penny. I think History is something that should be recorded and preserved where possible and if I've in someway added to the archive with 'Swindon Montage' then I guess I'm doing my bit.